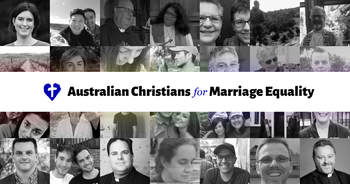 marriage as a divine sacrament

One of the dismaying elements of marriage equality debates has been the concentration by some Christians on elements of Christian tradition which are  both complex and which have evolved significantly throughout history (from ancient patriarchal polygamy in the book of Genesis to modern companionate love).   Placing emphasis, for example, on the human, 'this-worldly', character of historically received marriage as 'between a man and woman' not only affirms false binary divides between men and women and between people of diverse sexualities and ignores the changes in male and female roles over time.  It also points away from the sacred reality of Christian marriage as a symbol of the relationship between Christ and the Church: two realities which are both male and female and much, much, more.  Marriage in that sense can be powerfully symbolic and a huge blessing to transgender people, as well as a profound source of support, mutual love and care for others.  My hope is that, where marriage equality is established, people of faith may now explore more fully  how marriage can be sacramental and a means of enlarging our love for others as well as ourselves.  Of course others may simply regard marriage as a social contract or other expression of human connection - it certainly has predominately been that, in its many forms, throughout history.

marriage and family as a transgender issue

How sad it has been that opponents of marriage equality have used transgender people to try to confuse people when they rightly have lost the 'hearts and minds' battle over lesbian and gay marriage.  Transgender people have been powerfully discriminated against where a married person who has transitioned has been forced to divorce after gender confirmation surgery.  What an outrageous undermining of relationship and marriage itself!  Instead, hopefully we may all be enriched in the days ahead by receiving the gifts of transgender people and their partners and families.  Where relationships have stood the test of time and change there is clearly much to tell about what true love, faithfulness, intimacy and growth in marriage really means.

Sadly transition can indeed place great strain on relationships and cause pain and anguish on many sides.  As someone who has spent decades sharing in pastoral care and spiritual direction, I am deeply aware of this.  Whilst personally fortunate to have had amazing support from my own family in my transitioning, I am also acutely aware of the struggles of many friends and some members of their families. For trans children and young people this can be devastating.  Yet transition can also be a place of growth for other family members and friends of the person transitioning, especially where pastoral and spiritual care are offered in the spirit of Christ's healing love.  For in a real sense all of us are always on journeys of transformation into the deeper mystery of our lives and world.  The challenge is to find the best ways to travel and support one another.  Greater visibility and acceptance of trans people will help in this process.  More positive research and support is certainly needed for our relationships and families.
a few reflections for further consideration:
A letter to Christian parents of a transgender person - a pastoral letter from Anna of CatholicTrans)
For trans people, family rejection linked to suicide attempts, substance abuse - health study report (2016)